Places To See and Visit

Once in Batangas, here are some places of interest one could see and visit.

Mabini Shrine – Contained in the shrine are some of the writings and individual stuff of the late revolutionary hero and "Brains of the Katipunan" Apolinario Mabini. He is also known as the "Sublime Paralytic". A reproduction of his natal house and tomb can be viewed at the site.

The shrine is located at Barrio Talaga in the town of Tanauan and around 15 minutes drive from the town proper. The shrine is open daily from 8 AM to 5 PM.

The Mabini Shrine in Batangas

Gen. Malvar Museum and Library – Serves as a commemorative to the last Filipino general who relinquished to the Americans. The family of the late general donated the place. Found in the museum are oil paintings and personal belongings of the late general.

The museum is situated near the municipal hall of Sto. Tomas, at Gov. Malvar Street.

The library can be found at the town proper of Tanauan, at A. Mabini Ave. It is open to the public everyday, from 8 AM to 5 PM. 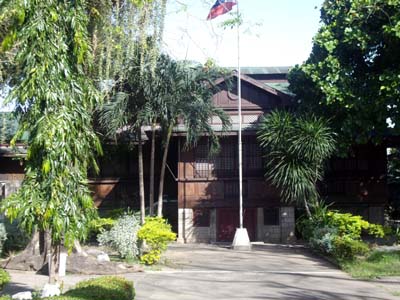 Punta de Santiago Lighthouse – The lighthouse was built during the Spanish time in 1890. The lighthouse still works as a guiding light for forthcoming vessels, and one of the oldest functioning lighthouses. Built from slabs, with a touch of Spanish architecture of the 18th century.

The lighthouse is located 20 minutes drive from the town proper of Calatagan.

Another Spanish built lighthouse in Batangas, Faro de Punta de Malabrigo was erected atop a hill in Lobo town. The historical landmark was constructed by Jose Garcia and designed by Guillermo Brockman.

Discover The Natural Falls of Batangas

Tingga Falls located in Daang Ibaan, Batangas City. The falls streams 365 days in a lovely rustic site and is about 30 feet high.

Ilijan Falls also found in Batangas City, and can be spotted at Barrio Daang Ibaan. The falls is so captivating, that the stream arises from a huge spring at the top of a peak. And the water, drops from one rock to another.

Calicon Falls can be viewed at the town of Malvar, in Barrio Calijon. The falls has two main falls, which is roughly 10 feet high.

And Bulalacao Falls in Barrio Bulaklakan, Lipa City. It has three diminutive falls and approximately ten feet high, with streams coming out from a small cave.

Spiritual Places to Witness & Drop In

Tanauan Church is situated at the town proper of Tanauan. The church was constructed in 1881, with a typical early European architectural style. It has an extraordinary wide-open middle nave and rounded niches. 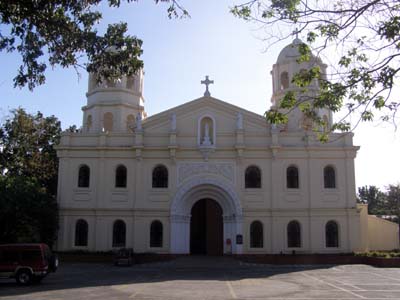 Church of San Juan is located in San Jose, Batangas City. Built in 1788, by the Augustinian friars. The church has a solitary passageway core, which offers a clear sight of the main altar. The altar is colossal, with six circular columns surrounding the image of St. Joseph.

Church of Immaculate Conception of Bauan was piece together in 1700. Built around a neoclassical architecture and its walls are of medieval architectural style, with narrow pointed windows. The church façade highlights symmetrical and spherical shapes.

Church of Guillermo can be found at the town of Talisay. The Spanish friars started the creation of the church in 1892. However, the church experienced heavy damage in 1898, and renovation of the church allowed the structure to be functional up to this moment.

Caleruega – A Site Close to God and Nature

The Submarine Garden can be spotted at the town of Lobo. However to reach the garden, one has to take a boat ride from either the town proper of Lobo, or in Batangas City. The boat ride will take you roughly 45 minutes.

At the Submarine Garden, one can see live colorful coral bed near the shoreline. The corals can be clearly viewed at early morning, during low tide.

Mainit Hot Spring can be sited at Barrio Pulang Bato, in the town of San Juan. On the other hand, the hot spring can only be reached with a 4 X 4 vehicle.

Another place you should not miss is Isla Verde, or Verde Island. The island is only accessible by boat, from the port in Batangas City. Once in the island, drop by at the following places.

Tinulunan is a place where wind-tossed waves gush and hit the rocky precipice supporting a lengthy highland. On top of the upland, one can see a breath taking sight of the coastline.

Cueva Sitio is a perfect place for picnics. The key charm of the place is a rock shelter, that gives shade to its visitors.


Home >> Places to See and Visit