Christmas in the Philippines

Christmas in the Philippines is a festivity, which starts as early as September. It is the longest and merriest fiesta in the whole biosphere and time for family, sharing and good food. A celebration of devotion and giving of thanks to Jesus Christ.

A number of radio stations and shopping malls start playing Christmas carol in the beginning of September, while shoppers start on a spree for the December holidays. These shows the importance of the celebration of the birth of Christ to Filipinos.

And in the province of Batangas, the tradition of the yuletide season is celebrated and felt all over the province with lots of fun. Batangueños decorate their houses and even streets particularly the town of Alitagtag, to commemorate and give a holiday spirit around the community.

Traditional Filipino Christmas decoration is the parol. A star lantern made of bamboo, cellophane and crepe paper. One can find parols hanging anywhere, from houses, schools and offices in different towns around Batangas. Schools and municipalities even host parol making contest and award the most creative participant. 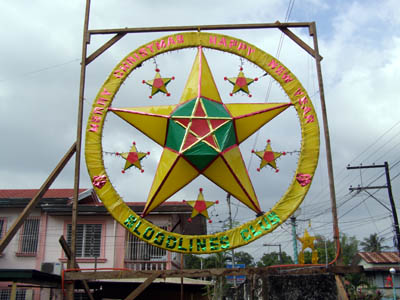 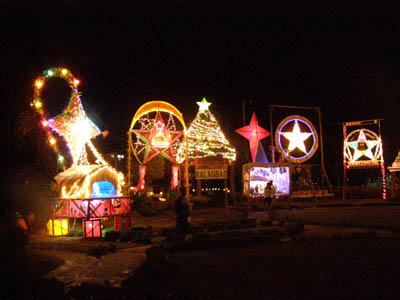 An added Christmas décor, which is traditionally Filipino, is the belen. It is a figure representation of the scene of the birth of Jesus Christ. Figures included are Jesus Christ as an Infant, the Virgin Mary, St. Joseph, the Three Kings and the barn animals. Commonly seen in churches, school buildings and homes. 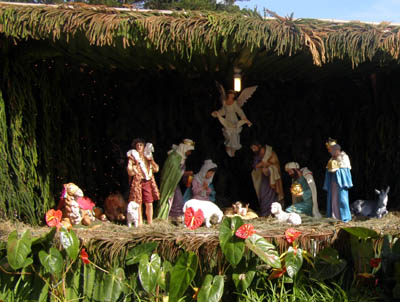 The Christmas season officially starts on the 16th of December, which is beginning of the nine-novena masses before dawn. Commonly called Simbang Gabi (Night Mass) or Misa de Gallo (Rooster's Mass). It is a form of sacrifice, which requires dedication and discipline to be up so early to hear mass for the coming birthday of Jesus Christ.

After the mass, churchgoers usually gather at the church patio to have some delicious delicacies like puto bumbong and bibingka. And have hot coffee, or hot tablea tsokolate to warm them up in the cool morning.

On the 24th of December Christmas Eve, Midnight Mass is heard, and it is a tradition that after the mass the whole family join together for Noche Buena (Christmas Eve traditional family dinner). Common foods served are lechon (roasted pig), hamon (Christmas ham), quezo de bola (ball of cheese) and other festive delicacy.

Relatives, friends and neighbors drop by, and wish each other Maligayang Pasko (Merry Christmas) and join the feast. The feast usually last till daybreak, while having their favorite wine and liquor drink.

In the morning, it is time for the children to visit the uncles, aunts, godmothers and godfathers. They are presented with gifts, and then food and drinks are served in buffet style. It is a day full of fun and happy memories.

The Yuletide celebration does not cease on Christmas day. After a week, relatives and friends gather again for New Year's Eve celebration. Families get together for Media Noche (traditional New Year's midnight meal). The Family celebration symbolizes their wish for a successful New Year.

During New Year's celebration, it is a traditional means of Filipinos to greet the New Year with loud noises. And lighting up of firecrackers has been a custom. Even with hundreds of reported firecracker casualties yearly, the tradition continues as the noises are meant to drive away bad spirits, which is the common belief of most Filipinos.

Thinking of celebrating Christmas in Batangas, or in any parts of the Philippines? I'm dead sure you will not regret your decision.