What is tablea tsokolate and what makes this drink distinctive from other hot chocolate?

Tablea is a Spanish word-meaning tablet, and tsokolate is a Filipino word-meaning chocolate. It is a thick hot chocolate specially made from cacao balls. The tablea can also be a thick disk or flat, and even in square form. But the balls are the most popular form made, and is considered as one of Batangas delicacies. 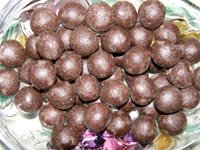 It is believed that the Spanish persuaded the growing of cacao trees and the developing of the beans into cacao tablets during the mid 17th century. During the Spanish era hot chocolate made from tablea is served during breakfast on special occasions. Consequently cacao chocolate drinking has long been a tradition in Batangas and other provinces in the Philippines.

The province of Batangas produces one of the best cacaos in the Philippines, due to its suitable tropic weather. The tree is normally grown in the shades of other trees, usually the taller coconut trees. It can grow as tall as 40 feet, and has fruits that are more than a foot long. The fruits color is brownish yellow to purple, and contains plenty of cacao seed. This seeds are the cacao beans, which turn out to be tablea tsokolate or cacao chocolate.

Making the chocolate starts by removing the fresh cacao beans from their pods, and peeling the skin. Then it is dried under the heat of the sun. The cacao beans are roasted (like coffee) for at least 3 hours and grinded manually. While grinding the beans the mixture becomes oily because of the cocoa butter would ooze out from the beans. The blend is mixed with sugar, and then forming it into balls.

In Batangas hot chocolate is made by boiling tablea with water and milk with sugar. The chocolate is stirred and thickened with a wooden beater, called a batidor. (Picture below) The batidor is rubbed vigorously between the palms of the hand to foam the chocolate. The use of more tableas per cup of milk would produce a syrupy chocolate drink. 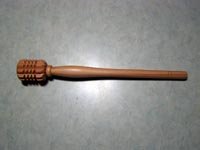 Here is a recipe of my beloved late aunt (Tita Celing) which she drinks every day during breakfast that you can try.

Place the tablea in a saucepan and pour the milk and water. Place over medium heat and allow it to boil. Cook gently until the tablea has melted. Stir the chocolate and add sugar to taste.

The hot chocolate is also great along with a bowl of pinipig (young glutinous rice). Another use of the tablea here in Batangas is thru the food known as champorado. (Breakfast porridge of hot chocolate poured over white rice.) And a popular native snack suman, (native rice cake wrapped in banana leaves) and hot chocolate is an extra combination for this warm drink.