Lipa City Batangas, Places to drop in and see

Lipa City Batangas is around 80 kilometers from Manila. Among the towns of Batangas, Lipa has the highest elevation at 1,025 feet above sea level, which makes it the coolest town here in Batangas.

The city has a number of poultry and livestock raiser with the top food corporation such San Miguel and other big companies maintaining their farms and food-processing units here. Historical architecture is one of the attractions that you can witness in the beautiful town of Lipa.

San Sebastian Cathedral known to the Lipeños as "katedral" is located at C. M. Recto or in the main roads of the town proper. The Cathedral was built in honor of St. Sebastian. It is the seat of Archdiocese of Lipa City Batangas, and the feast day is held every 20th of January.

The Augustinians governed the Lipa Parish from 1605 to the closing stages of the 19th century. Lipa was previously on the Coast of Bonbon Lake and was devastated by the explosion of Taal Volcano in 1754. The church was rebuilt at its present location and was reconstructed under the direction of Rev. Benito Varas, OSA Parish Priest in 1865. Pope Pius X established the Diocese of Lipa in April 10, 1910.

Built in the Romanesque tradition, the cathedral building design used columns and arches in an upward and downward sequence, creating the effect of a shadow-and-light play. The hemispherical top of the church and bell tower has a complex decorative strip and arched stained-glass windows. The nave of the church is barrel vaulted and now decorated with modern chandeliers. Its ceiling is covered with religious paintings. The church also has a spiral stairway to the choir balcony.

Our Lady of Mount Carmel Church

Our Lady of Mount Carmel Church is situated at Torres St. and it is the same street that leads to the famous Laiya beaches. It would be good idea to check out the Carmel Church before proceeding to Laiya if you are on the way for a holiday.

The church was recognized for the miraculous shower of petals bearing the face of the Virgin Mary. This was experienced in the Carmelite Monastery with the apparition of the Blessed Virgin Mary to a Carmelite visionary nun. Since then, the Carmel Church has become a destination for Catholics and pilgrims.

During weekends the church overflows with church worshipper coming from as far as Manila. The churchgoers ask for help and make wishes to Our Lady Mary Mediatrix of all Grace. Most of them also do their confession, which is held at different times during the day.

Carmel Church, When It Rained Rose Petals. A brief account of the apparitions of Mary, Mediatrix of All Grace in Lipa City. 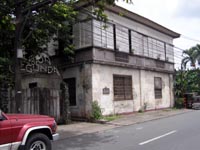 Mark by Spain's Heritage Casa de Segunda, the ancestral house of Segunda Katigbak (Jose Rizal first love) is located at Calle Rizal, and was built in 1880. The house is an archetypal bahay-na-bato.

Typical with the old houses during the Spanish colonial period is the ground floor, that are made of stone while the second floor are made of wood. One would immediately notice houses built at that time, that their living room, dining room and bedrooms are all located in the second floor. The windows are the big capiz (thin flat translucent shell) sliding windows, with ventanillas, which gives the house interior ample air ventilation.

Ancient history lovers should check out this house, for they will be amazed with aged stuff found inside the house. From huge narra (hard wood) slabs used as floorings to old furniture's, even an old-fashioned sewing machine can be found. Lots of valuable antique equipment and effects can be perceived inside the house.

There are a number of hotels, inns, resorts and a religious retreat house that can cater to your lodging needs here in Lipa. Local and foreign businessmen, together with a lot of foreign tourists hang around Malarayat Golf and Country Club. Another place to visit is San Benito Farm and Spa, wherein you can have a relaxing holiday.