What is kapeng barako?

Barako a tagalog word which means strong man or manliness, and kape means coffee. Because of its strong taste, it got the name kapeng barako.

Kapeng barako turned out to be a common name for all coffee from Batangas. It’s a rare and exotic coffee fully-grown in Lipa and other high places in Batangas, and known for its strong taste.

Batangas Brew is actually Liberica coffee, which originated in Liberia in West Africa. The coffee bean was brought to the Philippines and planted in Lipa by the Spaniards during the Spanish colonial era. Since Lipa is located in a high altitude area, one factor to grow good quality coffee beans. And the good climate and soil, made it distinct in quality with other Liberia varieties. Which is now popularly called kapeng barako in the Philippines.

Among the different varieties of coffee, such as Arabica and Robusta, the Liberica variety produces the biggest cherries, and makes a giant beans. The tree is about 9 meters in height. It has large lustrous grainy surface oval-shaped dark green leaves and creates an aromatic star-shaped white flowers. A fruit that contains two red-brown coffee beans follows. Another characteristic of the Liberica is its distinct pungent aroma.

It’s best-prepared dip brewed or the use of a coffee maker machine. In Batangas brown sugar is used, although some prefer sweetening it with honey. It is usually served black in Batangas, however cream can be added for individual taste.

How Kapeng Barako is prepared the Batangas Way

Boil water in a pot. Add brown sugar and let mixture boil for a few seconds. Remove pot from heat. Add the barako coffee, stir and allow coffee to brew for at least five minutes before straining. Coffee is served black. 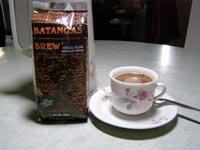