The word balisong could mean a barrio in the town of Taal, in Batangas. Or, it could be a Batangas blade/knife or a butterfly knife. The word literary means broken horn, from the words bali, which means to break and sung, meaning horn of the water buffalo.

And up to this very moment, no one could say whether the word balisong was derived from the place, or it is named after the knife. 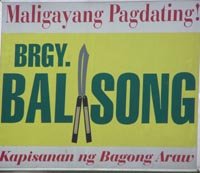 The butterfly knife, as the past relates to us, shows its origins a long way back during 800 A. D. as one of the earliest armaments of the Malaya –Polynesian fighting system the Kali. The butterfly knife, sometimes referred to as Batangas blade, is a lethal weapon that in the hands of a skilled professional can be opened faster, than a western switchblade.

Perfecto de Leon introduced the knife in 1905 where most of the butterfly knives originated from barrio Balisong Taal, Batangas. His involvement with the Muslims knife recognized as the kris, motivated him to craft the first knife with twisted rims.

According to Mr. Diosdado Ona, the knives are handmade in the traditional manner. A blacksmith will produce the blade, and another craft worker will sharpen it. The handle maker will prepare the rough frames while the others will polish the blades. Then it's time to insert the decorative inlays and put together the blades, handles and latches.

The customer has an option on what type of blade to be used. Mang Diosdado has a list from automotive leaf spring, stainless steel, brass, and Damascus steel. A customer can have his knife customized from the blade to the frame.

The longest balisong on retail at Taal Batangas is 72 inches, while the smallest is at 1.5 inches. However the longest size noted was at 6 meters during a festival in the town of Taal. The legitimate size is 29 cm in overall length. Cost of the butterfly knives ranges from $4 to $60 depending on the size of the knife.

An old man Mang Bening, from the barangay (barrio) told me during my visit to the place, that after World War II, butterfly knives became popular among the American soldiers. Most of the soldiers bought knives in the barrio before leaving the Philippines.

And for those who would like to test the sharpness of the blade. Here is a tip for you. Get a coin and hack the blade into the coin. If the blade delivers a hole on the coin and doesn't break, the quality of the blade is superior.

The stores along the highway of Balisong sell different kinds of knives. You can buy a kitchen knife, samurai, bayonet, butterfly sword, bolo and other garden tools.

Mang Diosdado has some maintenance tips to keep your knives in good condition. Keep the knife dry and keep it away from moisture. Apply oil on the blade with a soft cotton cloth to provide protection. If you happen to have a stainless steel knife, the blades of most stainless steel knives are not rustproof but are rust or stain resistance. This means that they still need to be kept clean and wiped dry after use.

Another maintenance tip that Mang Diosdado suggested is to keep your blades sharpened. Mang Diosdado uses a sharpening stone from the province of Mindoro called atay biya. Although it is hard to find the stone, he suggested using sharpening steel or other mechanism. Or maybe have them sharpened professionally.