Bagoong Balayan (Anchovy) production, a small-scale industry in Batangas, is one commodity Batangueños can be proud off. And the town of Balayan is where the best tasting anchovies are produced.

There are close to a dozen of backyard producers of anchovies, making it a profitable business in Balayan. Every manufacturer has its own special secret mixture in creating the anchovy sauce. Most of these surreptitious formulas are century old, which was passed through generations.

So, what is Bagoong Balayan? And how is it made?

It is a saline product achieved by partial fermentation. Brownish in color and cheese like in taste with a fishy scent.

Fish and salt are blended together and stored in containers called tapayan (large earthen jar). Intermittent mixing is essential to sustain an even absorption of salt in the mash. It is stored for several months for at least 4 to 6 months of fermentation. 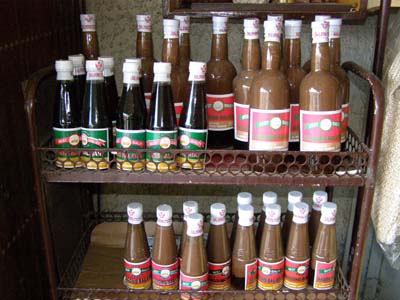 According to a well-known manufacturer of the anchovy, fresh fish is the secret in making a good quality bagoong. The fish are drained to eliminate extra vapour and laid out on receptacles to dry to a semi moist condition before salting the fish and adding their secret ingredient. (I was told that wine is being added as a secret ingredient.)

Bagoong is the most used sauce or dip in different towns of Batangas. A favorite dip for the indian mango (a different variety of mango) or the unripe green mango. And a very common sauce for most fish based food. It is also used as a salt substitute in Balayan Ceasar Salad dressing and other vegetables.

A very popular recipe among Batangueños, is by sautéing garlic in cooking oil, then, adding bagoong, and cook for at least three minutes. This is the most common sauce used by majority of households in Batangas.

Bagoong is rich in protein and a cheap protein source in the diet for a wide sector of the residents of Batangas. The pleasant taste cannot be substituted by any different food preparation.

Since Batangas has ample fresh fish supply and surrounded with beaches, anchovy production has become a good source of income, among the town folks of Balayan. The industry has become a viable one, with a big capability to break through the international market.